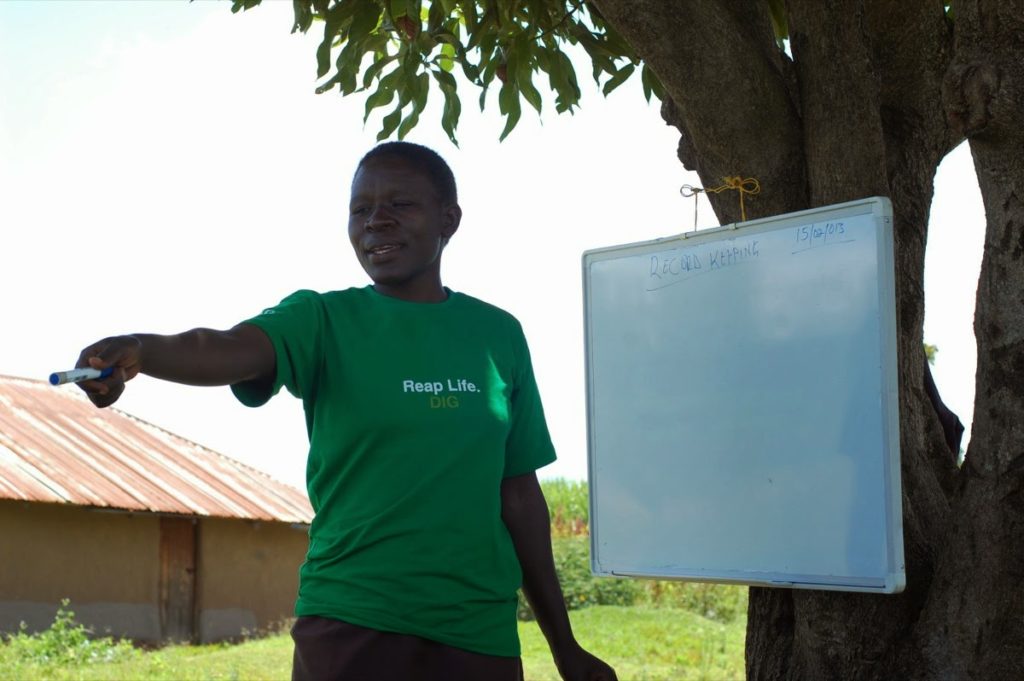 Vida Aooko Bitta, 30 years old and mother of four, is one of a DIG (Development in Gardening) team of community facilitators in Rongo District, Western Kenya. What she and the team are trying to do is transform the diet, improve the well-being and fill the pocket-books of local farming families. Many of these are among the 240 million Africans who regularly go hungry.
Vida’s home is just a mile away from the Lwala community hospital compound where the team is based. A large demonstration garden has been established there by DIG. This is where Vida and another 119 other local farmers, both men and women, have been trained in sustainable organic permaculture.

The course was no quick brush with new ideas, but a thorough six-month syllabus: natural composting, nitrogen-fixing, raised beds, the ‘food forest’, and the nutritional value of ‘new’ protein-rich crops – new to Rongo District anyway. Vida’s own garden exemplifies what she learned: papaya trees, which her small son enjoys climbing, banana trees in a ring, rows of green kale, and lots of pulses and legumes.

Originally, the Lwala hospital garden was a place where HIV patients and others who needed to eat better to recuperate could learn how to grow highly nutritious foods – such as protein-rich amaranth, pigeon peas, beetroot, carrot and capsicum – cheaply. It has since has become much more than that: the starting-point for a rediscovery of food as a route to community health, wealth, and well-being.

Here, near the shore of Lake Victoria, the landscape is green, and the soil a rich earthen red. Most people live on smallholdings of just a few acres. They plant most of the land to cash crops, sugar cane or maize. Agro-companies buy the harvest at prices they dictate. In the dry season before the rains, when food crops and cash are used up, families go hungry. Even when they can afford to eat more than once a day, and many cannot, the meal is a monotonous plateful of maizemeal porridge with a few chopped-up green leaves.

This is the situation DIG is aiming to change. It’s a big ask. To invite farming people to change what they grow, how they grow it, what they eat, how they cook it, and get their families to approve: that’s a lifestyle transformation. Such change does not come easy, even when it does not require much of a cash investment.

Of the 120 trainees who took the Lwala permaculture course, Vida was one of 20 selected to take a further ‘training of trainers’. Of these, the best five were chosen to be DIG facilitators – and it is easy to see why she was picked. Vida is the kind of person who laps up new knowledge and is keen to try anything that will improve her family’s life. Her husband, she says, is inclined to sit back and take things easy. So is her sister. That’s how things are. Not everyone is the same.

Vida did not go to secondary school, but she would surely have flourished if she had. Like the other DIG facilitators, she is resourceful, committed, bright, adaptable, a good team player – everything that any organization would welcome in their front-line staff. It is the facilitators’ job to contact women’s groups, farmers’ groups and HIV support groups and – if they want to co-operate – instruct them in how to adopt the DIG philosophy and practice

In the area around Lwala, there has been a definite change. ‘Instead of one meal a week from the old-style kitchen garden, many families now eat four or five,’ says Vida. ‘And they have stopped buying food and draining their resources that way. Some are even earning money from selling veg.’ People have begun to catch on to the lifestyle idea of eating better and trying out brightly coloured beetroot and carrots – things familiar elsewhere in Kenya but never seen here before. The DIG team are also teaching new ways of preparing food – a local Luo ‘nouvelle cuisine’.

Vida’s colleague Samuel Otieno explains their success. ‘Farmers around here just followed the old ways. There are no agricultural extension services, no introduction to new ideas. When you come with new techniques – and organic is affordable – farmers are motivated. We are bridging the gap between the ‘unimproved’ and the ‘improved’. People who used to struggle to buy food now grow these new vegetables, and they appreciate them. They feel better too.’

Olivia Nyaidho, DIG’s programme co-ordinator in Lwala, who is a professional agriculturalist from Kisumu, the regional capital, cannot speak highly enough of her team. As well as Vida, Samuel and the three other facilitators, she has an assistant co-ordinator, also a local person, Sarah Obonyo, responsible for spreading the DIG philosophy and practice in schools.

The team reaches out to local groups, builds partnerships with teachers, runs courses, holds open days and graduations, and follows up with individual adoptees. The DIG approach may seem staff-intensive. But if you are trying to transform something so fundamental as farming practice and eating habits, there is no short cut. You must carry on until the new ways have become so accepted that everyone begins to follow along and even the laid-back decide to join in.

Too often, the great blunderbuss of international aid and development focuses on the macro-agricultural picture. They address the hunger problem by inventing some new pest-resistant type of yam that no-one want to eat; promulgating hybrid strains of maize with expensive chemical inputs that lock smallholders into debt; expanding irrigated areas by mega-dams that wreck the landscape; and having the gall to call all this the ‘Green Revolution II’. Schemes with such high capital costs and advanced technology by definition exclude and dispossess farmers like Vida, and all those she and her DIG colleagues are helping to become ‘improvers’.

All it takes to transform the lives of most hungry people is to start from where they are at. Look at what is in their gardens and on their plates, and see what small improvement in their farming and eating practices would enable them to have better, richer and more healthy lives. And then recruit and train a team with people like Vida Aooko Bitta to help it come about.