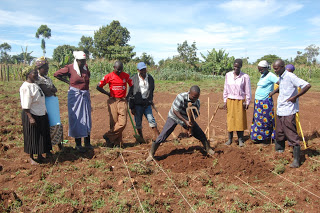 When you go on safari in Africa, and you’re relaxing on the porch of your tent watching the hippos and crocodiles in the river or the zebra and gazelles on the plain in front of you, your safari hosts will jokingly say that you are watching ‘Bush TV’. For those without access to safaris, DIG is undertaking to launch a new channel called ‘Garden TV’. Last week at Crossroads Springs Institute, a primary school for orphans and children affected by HIV and AIDS, we discovered that one mzungu (foreigner), one teacher, two groundsmen, and twenty-five students digging garden beds provided hours of spellbinding entertainment for more than one hundred students to watch!

While not without their challenges – TIA (This Is Africa), after all – DIG’s first seven weeks back in Kenya, after an extended hiatus, have been incredibly exciting and rewarding. With the support of the Segal Family Foundation, we are initiating custom-designed agricultural programs for two local Kenyan organizations dedicated to helping underserved rural populations. In October, we began converting an almost one-acre piece of land in front of Lwala Community Hospital into a farm providing food for the hospital and practice plots for a Farmer Field School to train community groups in sustainable agriculture for improved income generation. In November, we continued on to Crossroads Springs, where we are laying the groundwork for a system of local food production that will reduce overall food expenses for the school as well as starting a small vegetable garden – the site of Garden TV programming – on the school grounds to train students in horticulture and nutrition.

Mama Hanna’s brilliant yellow taffeta dress, complete with puffed sleeves and a generously gathered skirt, brought the sun down from the sky and right into the middle of our field. As her large, leathery hands gripped the wooden handle and lifted it above her head, she grinned and brought the djembe down with a satisfying thwack that sunk into the soft soil. I squatted in front of the garden bed that she was preparing and began snapping my camera, looking for the perfect juxtaposition of glowing taffeta, lush green fields, fresh soil, and blue sky. And Mama Hanna’s smile.

Only the day before, I was doubled over in riotous laughter along with the other members of ‘Support Group’ as Mama Hanna offered a demonstration of how a man with a too-large tongue speaks. Her cheeks puffed with the imaginary tongue, and the supposed words came out in a low-pitched slur of grunts and puffs. Djembes dropped and diggers collapsed like dominoes, laughter bringing them crumpling to the ground. While tossing spadefuls of soil and fighting rocky hardpans in the rather intense process of preparing double-dug garden beds, the entertainment continued without a break. Sweat trickled and sometimes poured down temples, occasionally slowed in its downward movement by the heavy wrinkles of an aged face, but the swinging of the djembes never ceased. When the sun shone down without making a shadow, twenty beds were finished, and only then could the tools be put to rest and slurping of the requisite cups of steaming milk tea commence.

“What do you expect to benefit from this training?” we had asked the group of twenty seated before us a few weeks earlier. We were attempting to elicit some sliver of their actual thoughts before the all-too-common repetition of “what I am supposed to say” phrases began coming out. Ten representatives of the women’s group Umama Salama (safe mothers women’s group) and ten representatives of the HIV support group offered their responses.

After further discussion about what the training would actually entail, what could be expected and what DIG would require, we agreed that the representatives would return to their larger groups, explain the program, and the groups would select ten individuals to participate in a six month training covering sustainable agriculture, marketing, small business development, and more.

Perhaps the twenty people who signed up with visions of free rubber boots and DIG t-shirts dancing before their eyes weren’t exactly expecting those first few days of intense digging and sweating, but their enthusiasm hasn’t waned. They appear faithfully every Monday and Thursday at 9 a.m., carrying basins of cow manure on their heads and bundles of green materials for compost in their hands; they recount the previous meeting’s lesson topic in great detail (Mama Hanna’s large fingers adopt a surprising finesse as she exquisitely pantomimes how to sprinkle just the right number of seeds into the nursery bed and cover them with just the right amount of soil); rain or shine, as they are accustomed from years in the fields, they dig, rake, plant, transplant, and attend to their crops; and with careful direction from Faith and Tobias, DIG’s new project assistant and community agriculture trainer, they fill out their logbooks, recording their activities and tracking information that will help them determine the most effective means to achieving the high yields they hope to see.