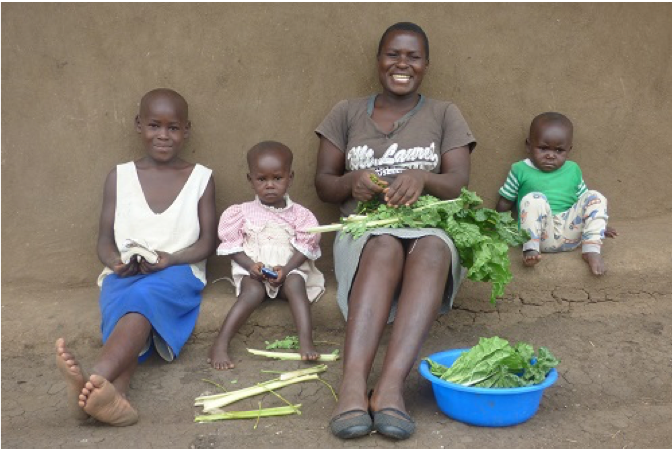 After completing her primary education Salome married at 16 years old to her husband Odongo. They live in rural Homa Bay County, Kenya. When Denis and Maureen were three months old, Salome observed that Maureen’s health had started to deteriorate. Even though she continued to breastfeed, Maureen was failing to thrive.

Salome recalled, Maureen was the first born, she was fat and good looking, but as time passed her body started to go down.  I think I didn’t have enough milk for them both.

Responding to her daughter’s struggle, and as doctors recommended, Salome, introducing Maureen to solid foods at six months. Unfortunately, it had little positive effect and her health continued to deteriorate. This was made worse when the twins contracted a mild case of measles and malaria. While both children completed the appropriate treatments at the hospital, only her brother recovered. Maureen’s health worsened. She didn’t have an appetite to eat and began losing weight. Being an unresourced housewife, Salome did not have money to buy extra food so she continued to feed Maureen porridge, ugali, and soup.

Millicent, a DIG Mentor Mother, was referred to Maureen’s case. Millicent immediately visited their home and encouraged Salome to take her child to Marindi Hospital for a nutritional assessment. Maureen had thin brittle hair and a MUAC (mid-upper arm circumference) assessment of 4.7in. Weighing just 19lbs with a height of 28in she was diagnosed with Moderate Acute Malnutrition at 1 year 4 months. She was immediately given a supply of ready-to-use supplementary foods for three months and Millicent began working with Salome to implement a home garden to meet Maureen’s nutritional needs.

In her home garden, Salome planted spinach, kale, amaranth leaves, moringa, and black nightshade.  Two months down the line, she started to feed Maureen from her garden. Salome would mix spinach and amaranth leaves with moringa to feed her children. Additionally, she would sell excess greens from her garden to supplement her income and use that money to buy cooking oil and other essential household items.  Life became easier once she had a consistent supply of food at her home and a source of income from the sales of vegetables. She also began to see a big change in Maureen.

‘My children love to eat spinach, sometimes I mix it with moringa leaves for additional nutrients. There are times when Maureen requests only vegetables. My engagement with DIG has caused me a big change. Maureen now looks and is healthy. The twins still breastfeed, and adding moringa leaves to my food has helped me produce more milk.  Maureen now plays and is as active as her brother. You can’t imagine the joy I have when I see the two of them playing together.’

Undernutrition accounts for 45% of deaths among children under 5 in low and middle-income countries (Global Nutrition report 2018). Malnutrition rates remain alarming; stunting is declining too slowly while wasting still impacts the lives of far too many young children.

The effects of malnutrition are far reaching and create major barriers to development. Poor nutrition in the first 1000 days of a child’s life can lead to stunted growth, which is associated with impaired cognitive ability and reduced school and work performance, (UNICEF 2018).

Kenya continues to struggle with poor nutrition, reporting 30% undernourishment rates among under-fives and stunting levels at 26%. DIG’s Priority Household Program aims to improve the nutritional status of children under five years through the establishment of home gardens and nutrition education to the affected households.

The project works on a referral basis with Marindi Sub-County Hospital in Homa Bay County.  Once a child is diagnosed as undernourished, the hospital nutritionist puts the child under ready-to-use therapeutic food (RUTF) and is referred to DIG to assist with developing sustainable home gardens and further nutrition education on foods that can be grown locally in home gardens which are nutrient dense.  In addition to sustainable agriculture training, DIG’s Priority Household Program also includes cooking demonstrations incorporating garden produce, cooking methods that preserve nutrients, water and sanitation education and nutrition trainings. The trainings are designed to address optimal nutrition for under-fives as well as for nursing and expectant mothers. The project further monitors the child’s growth in collaboration with the hospital.

In 2019, the project reached out to a total of 39 households with undernourished children. The children showed various manifestations of undernutrition such as kwashiorkor, marasmus, and anemia.  DIG’s Mentor Mothers took families through a series of nutrition trainings while ensuring households took their food supplements from the hospital appropriately. DIG saw nutrition gains at every household with only one child who has not yet moved to being well nourished. That child has since been adopted by another family who has the means to properly care for him.