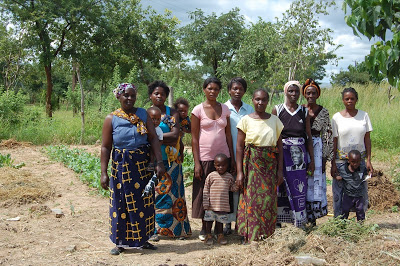 One month can be an infinite amount of time in a garden. In one month, gorgeous green plants can disappear from the face of the earth. They can wither from lack of water, be obliterated by insect attacks, be mortally wounded by neglect of all kinds. However, one month also happens to be enough time for plants to quadruple in size, to go from flowerless to exploding with fruit, to overflow the boundaries of their beds, and to fill buckets with their produce. And so it is in Zamland. What a stunning surprise to return to after the holidays! Gardens that I had left in very tenuous positions took root (literally) and took off!

We are incredibly privileged to be working with some absolutely wonderful groups of people. The ART (Anti-Retroviral Therapy) support group at Kafue District Hospital (KDH) has been laboring intensely for three and a half months, and they are reaping the firstfruits of their labor (much more to come, we hope!). Green beans, spinach, Chinese cabbage, lettuce, zucchini, and patty pan and yellow crookneck summer squashes are being harvested in quantity, while peas, eggplant, tomatoes, tomatillos, winter squashes, sweet and hot peppers, and okra are all ripening. Neem and moringa trees are sprouting along the fenceline – along with some of the living fenceposts that we planted – and avocado, loquat, lemon, and guava trees, as well as a granadilla vine, are soaking up the rains and thriving.

With our core group of about ten people at KDH, we are now beginning to plan for a transfer of leadership, so that they can assume full responsibility for the maintenance and management of the garden. In March we will begin a series of organic gardening workshops to provide a strong foundation in the techniques we have been practicing in the garden. We have formed a business committee to handle produce sales and marketing and to plan for a sustainable financial future. Over the last few weeks we have had a constant stream of people – hospital administrators, nurses, groundskeepers, other staff, and local community members – coming to the garden in search of fresh produce. We are also organizing a planning committee to make sure that the garden is constantly producing and that practices like soil improvement through crop rotation, seed-saving and compost-making are continued as a fundamental part of the garden. Finally, we are beginning to realize our pass-it-forward goal of donating produce and are providing vegetables for nutrition classes and cooking demonstrations for pregnant HIV+ women.

In addition, the mothers2mothers (m2m) group of three HIV+ mothers who are sharing a large plot with the ART group has demonstrated an incredible motivation to develop their part of the garden as much as possible. With almost no oversight or assistance, they doubled the size of their garden while I was away, transplanted excess plants from their first beds, and made plans to continue expanding! They are hoping to inspire other mothers in the postnatal and underweight under-5s support groups to join them and keep on growing!

The second main garden, at Railway clinic, is also doing very well. We’ve encountered some challenges with the soil – it was previously quite heavily cultivated, and while seemingly soft and loose on top, it appears to be quite low in some essential nutrients – and, it seems, with a “kawalala” who appears to have a special taste for green beans. However, the group of about eight core women continues to work extraordinarily hard, and they’ve filled every possible space with okra, impwa (local eggplant), Chinese cabbage, spinach, sweet potatoes, cassava, green beans, cucumbers, and whatever else they can fit in.

Now that Railway and KDH are beginning to take care of themselves, we have expanded to two new clinics in the area – Kafue Estates and Nangongwe. At Kafue Estates, we only have a small space in front of the clinic, so we will attempt to demonstrate some traditional in-ground beds and compost-making as well as some space-saving options like growing up vertical surfaces and using containers. Once the main garden is established, the emphasis will be on using it as a training space and encouraging people to establish gardens in their homes.

At Nangongwe we are emphasizing a new program that will bring the clinic’s MCH (Maternal and Child Health) programs together with ART and PMTCT (prevention of mother-to-child transmission) programs in the garden. In addition to having a core group of people who will run the garden on a day-to-day basis and share the produce, we will particularly be targeting pregnant women who have been newly identified as HIV-positive. We will invite them to participate in the garden as a means to keep them connected to the clinic – many women in the areas in which we are working do not utilize many of the health services available to them – and to provide extra motivation to adhere to the ART regimen that they will be following to prevent transmission of HIV to their unborn babies. We will offer weekly health talks as well as garden classes and cooking demonstrations, as well as the opportunity to be part of a group who is learning gardening skills and will eventually be supported in setting up home gardens. Overall, this project will be an experiment in the power of the gardens not only to contribute to nutrition, income-generation, and empowerment activities, but to play a role in the prevention of HIV (in this case, mother-to-child transmission) as well.