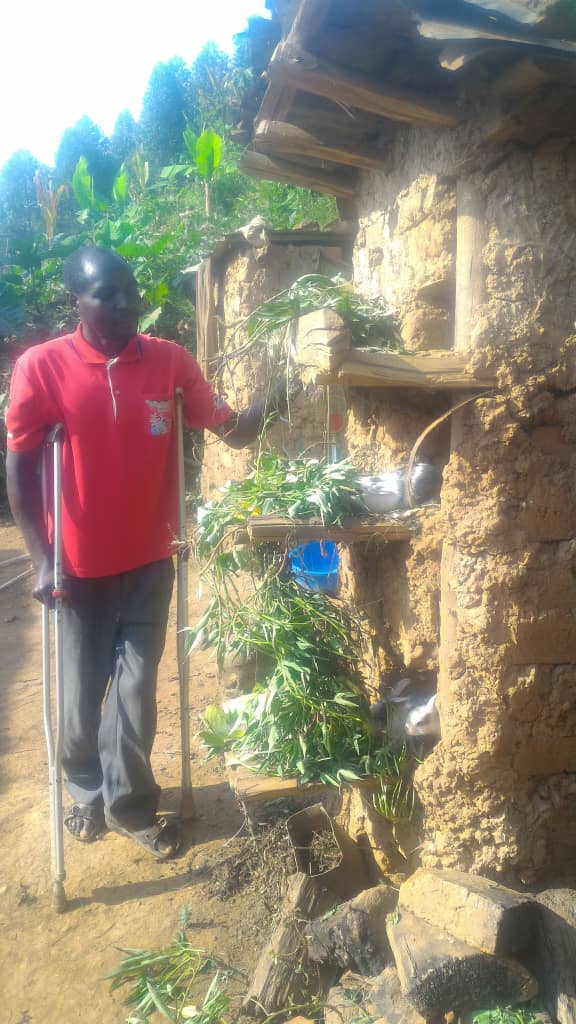 Augustus Atugwaneho was a construction worker. He helped build the major road near his home that connects two towns in Southwestern Uganda, Kable and Kisoro. His job was stable, and he enjoyed the peace of mind that provided for his family. He sent his kids to school, was able to regularly put food on his table and felt pride in being a good provider. Unfortunately, an accident at work changed everything in 2011.

Augustus was in a truck transporting construction materials needed for the road. The truck fell over and in the accident Augusts fractured his leg. After a series of hospital visits, his doctors determined that the best solution was to augment the break with metal, fixing his leg, but greatly limiting his range of mobility. Reflecting on the life changing event, Augustus shares “In a matter of minutes, I went from having job security to having to stay home and do nothing because I couldn’t move.” Augustus was left without a job, without income, and without the mobility to find work that could pay the bills.

A year after DIG first adapted its program to serve people living with disabilities, Augustus learned of the opportunity and joined the program. He joined with his wife, Estella, who participated under DIG’s Community Ally program. Estella would join the other Community Ally farmers as a person who could learn, support, and help break down the stigma that people living with disabilities often face in rural communities. Estella attended trainings with Augustus and helped with the portions of gardening that Augustus wasn’t physically able to complete.

Together, Augustus and Estella would join DIG’s larger network of gardeners living with disabilities. Today, that network encompassing 400+ farmers amongst 14 groups in different areas of Southwestern Uganda.

Augustus and Estrella meet with their DIG facilitators and fellow farmers weekly in group named Muko Abarema Farming Group. Working together at their demonstration site, they learn innovative, low-labor intensive techniques for restorative farming. The group is also being mentored by DIG facilitators to develop garden projects which have been uniquely adapted for each farmers’ strengths and accounts for their mobility challenges. This goes beyond skills training and building a long-term garden plan. What’s more, through DIG’s entrepreneurship program, Augustus and Estrella learned goal setting and family financing skills that they’ve begun applying at home.

DIG’s local facilitators, Amos and Andrew, have extended their support to the household level,  visiting Augustus and Estrella in their home. Amos and Andrew helped the Atugwaneho’s plan for a home garden and farm business that would allow Augustus to create a family farm with their three children. Andrew, DIG’s lead PLWD Facilitator, speaks of Augustus with a smile on his face stating, “Augustus is so eager to learn. He always takes what he learned from the demonstration garden and uses it at home. He often calls me on the phone to get more advice. Although Augustus can not walk well, he passes on the knowledge to his children who help him garden.”

Augustus went from worrying about how he would support his family, to bringing his family together through gardening.

Augustus started his family garden using seedlings grown in the demonstration site.  Through his sales of beets, spinach and cabbage, Augustus and his family decided to use the profits to invest in growing more vegetables. They purchased carrot seeds and watched them grow. After harvesting, the family sold the carrots and bought a piglet and six rabbits. This diversification of livelihoods allows the whole family to get involved and helps to reuse and recycle natural products created by the garden and the animals.

Augustus says that after his accident in 2011, he never thought he would be able to support his family. Today, he and his entire family are actively involved in gardening and animal rearing and have plans to continue expanding their business.  It’s farmers like Augustus and Estella that remind us that planting the first seeds can create a world of new possibilities.

DIG is always learning from our farmers and we’re grateful to have learned so much from this incredible family.