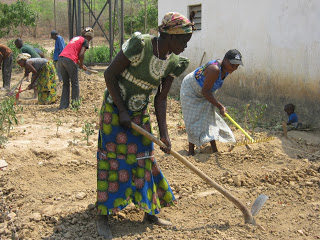 Under a toasty sky, members of the Kafue District Hospital ART support group gathered on October 12th to begin breaking up the hard earth and imbuing new life into their vegetable garden. The previous year, completely on their own initiative, without support from any outside organization, the group had prepared a large piece of land for growing local vegetables as an income-generating project. They had a vision for strengthening their group through developing a variety of activities at and around the hospital at which they are based. Besides providing health education on different topics of particular relevance to people affected by HIV, they wanted to set up a garden and a small canteen selling healthy home-cooked food to patients and visitors at the hospital. They hoped these activities would attract new members to the group and contribute to developing a stronger local community of HIV-positive individuals.

However, after some months of faithfully attending to the garden, they found that the hospital’s water system was unable to provide a consistent source of water through the dry season, and they suffered an additional setback when an invasion from cows on a neighboring farm damaged many of their plants.

When I first saw the garden in September, it was a crusty, hardened piece of earth with withered remnants of peppers, eggplant, and sweet potatoes scattered around. But when members of the support group heard about DIG’s plan to help start vegetable gardens in Kafue, they were eager to organize themselves and re-start the project. They had been looking for assistance to construct a fence, resolve the water problem, and move forward with the garden, and thus DIG’s arrival was an answer to their prayers.

With the strong motivation of a core group of participants, and the assistance of others who have some interest in the project, in three short weeks the land has been transformed into a neat array of double-dug inground and raised beds, with a nursery full of sprouting eggplant, tomatoes, sweet and hot peppers, cabbage, kale, Swiss chard, spinach, lettuces and herbs. While most support group meetings see an attendance of less than ten people, garden work days have attracted as many as seventeen. And once the rains begin to fall, the seedlings are transplanted, the direct-seeded plants begin to fill up the long beds, and green leaves cover the brown earth, we won’t be surprised to see more and more people coming over to find out what is going on.

In fact, the garden has already attracted the attention of another support group for HIV-positive mothers, and starting next week they’ll begin working alongside the ART group. This will give the ART members an opportunity to take what they’ve already learned and share it with others, and it will start the process of extending the benefit of the garden further into the community.

In the meantime, while we are waiting for the start of the rainy season and the installation of a pump that will guarantee water supply to the garden throughout the year – thanks to a collaborative effort between DIG, CIDRZ, and the hospital – we are having regular discussions about vegetables and nutrition, organic gardening techniques, garden planning, and how to establish a garden that will be both environmentally and financially sustainable well into the future.

Watch for photos tinged with green some time in the next few weeks!